The 26th Open Russian Festival of Animated Films officially ended in Russia on March 23, 2021, our short film “10000 Ugly Inkblots” was awarded as Critics' Choice--Best Film of 2021 (the White Elephant Prize) , the 1st place in the professional rating, and the Unique Mastery of The Animation Art. 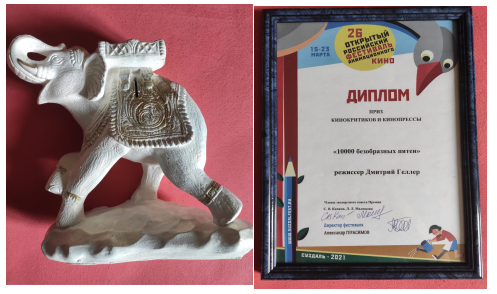 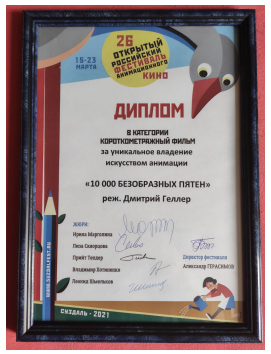 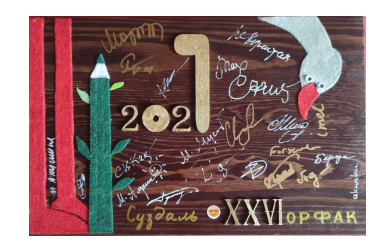 The Open Russian Festival of Animated Films was established in 1996. It is held in Suzdal, Russia every March. This festival is one of the three top Russian film festivals. The festival is an annual event in Russian which sponsored by the Russian Ministry of Culture and organized by the Russian Animation Association. It gathers major animation companies from Moscow, St. Petersburg, Novosibirsk and other places to display their works and communicate together. 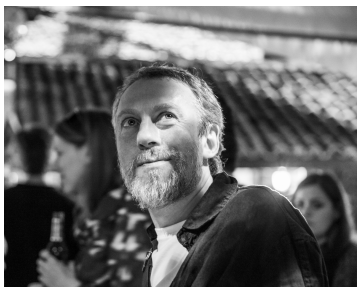 “10000 Ugly Inkblots” was directed by our guest professor and famous Russian animation director Dmitry Geller who led the joint creation of teachers and students of JAI. Since 2010, Professor Dmitry Geller has visited JAI for many times, he led teachers and students to create “Mice Burying A Cat”, “The Pond Under The Great Wall”,  “Fish, Swimmer, Boat” and many other excellent animation works, the work “Mice Burying A Cat” won the Best Film Award at the 14th Hiroshima International Animation Festival. “10000 Ugly Inkblots” is our excellent animation short present on the top international festivals again after " Mice Burying A Cat ", " Fish, Swimmer, Boat ". “10000 Ugly Inkblots” won the 1st place in the professional rating of The 26th Open Russian Festival of Animated Films, Professor Dmitry Geller was also invited to serve as the president of the judges penal next year. 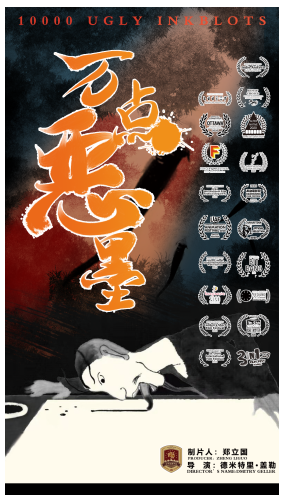 Our first 8k ultra HD Chinese ink wash animation short “10000 Ugly Inkblots”  has been selected by 27 top international competitions by now, including Annecy International Animation Film Festival, Ottawa International Animation Festival etc., and won the Best Editing on X фестиваль «Вечера российского кино в Бордо» as well. These awards not only demonstrates the creative strength of our teachers and students on the international platform, enhances our international influence, but also reflect a feature of our school running characteristic—Openness and International Orientation, Integration of Education, Research and Industry, Technicalization of Creative Products.